Gather Round: “Campfire” is a New Beacon for Lake Linganore 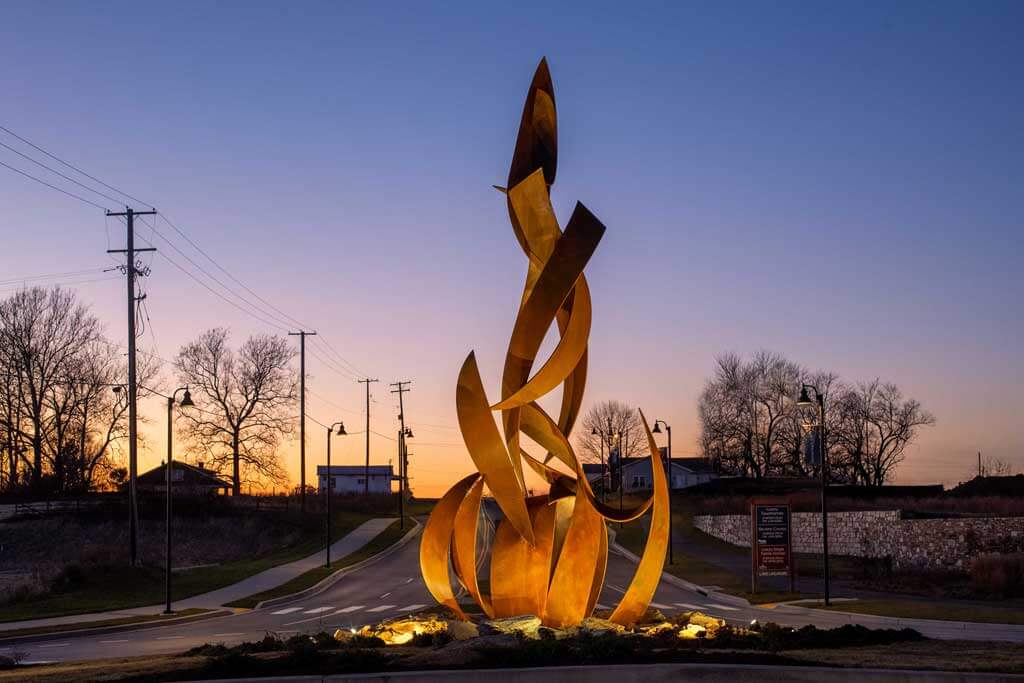 There’s a new landmark just outside Frederick, MD—visible from miles around to the cars rushing by on I-70 and, more importantly, to those arriving at the Lake Linganore community off Old National Pike at Eaglehead Drive. Installed in December, artist Joshua Wiener’s “Campfire” rises 35 feet above a traffic roundabout at the community’s entrance; its flames seem ephemeral, like they’re licking the air, yet they’re wrought with 25,000 pounds of raw steel.

“It’s a unique calling card” for Lake Linganore, says Jason Wiley, vice president for Elm Street Development, which commissioned the piece. “This is the main entrance to a neighborhood of 7,000 homes, so we wanted to do something very unique and up to the scale of the rest of the neighborhood.” The investment, he says, is a long time coming. The neighborhood was first established in 1968 and evolved in “fits and starts” as the community went through several developers and a patchwork of progress that left large sections incomplete for years. Since Elm Street became involved in the community, Wiley says, “we’ve focused on highlighting the unique elements of Lake Linganore.” Centered around a 200-acre lake with networks of trails through preserved green space—and with villages within the community named Aspen and Alpine—the campfire theme seemed especially fitting, he says.

But that wasn’t the original intent. Elm Street executives started looking for an artist who could create a massive piece of public art about two years ago without any preconceived notions about what it should look like. More than 50 artists submitted proposals, but Wiener emerged from the eventual shortlist with his vision for the campfire. “I felt like this was important because the experience there is one of communing with nature. I always feel like when you’re in nature, there’s this sense of arrival with a campfire,” he says in a video outlining the project. Because it’s at such a prominent intersection, the artist continues, “I wanted to give a sense of destination and a sense of place and a sense of activity. I felt like the campfire has this rich movement to it. The movements of everyone passing by will animate the piece, and the changes of the day will give it this sense of continual movement. I wanted it to be something that could be appreciated anew every day.” And though some have worried that the steel looks like it’s rusting, that’s all by design. “Self-weathering steel … is a high-grade material that has been formulated to withstand the elements and maintain its beauty for long periods of time without any maintenance,” Wiener wrote in his artist statement. “I also love the warm tone for a fire.”

Rick Brace serves on the board of the Lake Linganore Association and led the planning committee that reviewed Elm Street’s plans for the sculpture among other items on an amenities plan that included nature trails for hiking, water trails for canoeing and kayaking, and multi-purpose sporting fields. “The folks were quite positive about it,” says Brace, who was particularly impressed with Wiener’s grasp of what Lake Linganore’s planners aspired for their neighborhood to be. The original developers, Brace says, “were trying to connect people to the land and specifically to the woods.” The original tracts of land, in fact, had campsites on them before they were developed. Wiener’s artist statement builds on that theme: “People gather around a campfire ring and enjoy simply being. There is a relaxed and vivacious feeling because it holds our attention and gives us a sense of peace.”

For Brace, the sculpture reminds him of his early days on Boy Scout camping trips, and later facing the elements as an Army infantryman. “A campfire is truly a beacon for the forest,” he says, but within the present-day context of Lake Linganore, the sculpture goes farther than that. As Elm Street proceeds with the development of new homes and commercial areas that will transform it into a destination and not just another suburb, he says, “this will be a prime landmark to enter our community.”

Lake Linganore is in eastern Frederick County, Maryland, off Route I-70, less than 20 minutes from historic downtown Frederick. Connect at lakelinganoreliving.com for information on visiting, home tours, and to see Joshua Wiener’s “Campfire” in person!